One of the most effective ways to handle a scandal is to find opportunities to promote positive redemption: what can we learn and how can we use it to our advantage in the future? The citizens of Wunsiedel did a wonderful job of conceptualizing and executing their prank, while at the same time raising money for a cause.

Since the 1990s, neo-Nazis have been invading the village of Wunsiedel on National Heroes Remembrance Day to visit the grave of Adolf Hitler’s Deputy, Rudolf Hess. Wunsiedel, with a population of nearly 1,000, has tried to stop these demonstrations from happening every year, only to fail each time.

The people of Wunsiedel ran out of patience this year and fought back in the most effective way possible: they decided to pull a prank on the group of neo-Nazis, under the slogan “Right Against Right” and assign a new meaning to the march in their village.

For every metre that the neo Nazis walked through the village, local companies donated 10 euros for “Exit”, a project that supports neo-Nazis who want to leave the organization.

The organization also posted updates on Twitter every time the neo-Nazis hit a checkpoint in their march.

They poked light fun at the neo-Nazis by using banners emblazoned with messages, such as, “Brisk like greyhounds, tough like leather, and generous like never before,” an allusion to former Nazi slogans of the Third Reich. Included in their prank was a table piled with bananas, and another banner with “Mein Mampf” which means, ”my food,” instead of “Mein Kampf”, the title of Hitler’s well-known book.

This well thought-out prank is a proper example of what any public relations practitioner should reference, when handling a negative situation. They understood what their opposition and used their own words and ideals against them, completely stripping the neo-Nazis of their power. 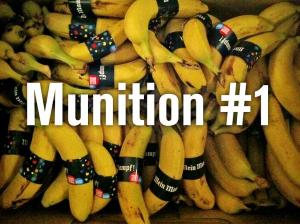 In total, the village residents raised 10,000 euros and all donations were collected for Exit.

Anyone can use this method to their advantage, not only in public relations, but also in everyday life. It’s the power of taking a gravely negative situation and transforming it into something positive and opportunistic, yet still remaining true to the context of the issue.